The idea of One Roll, One Camera reviews is to take a film camera or an odd lens and shoot a roll of film with it and write a review about it. Most of my cameras are from the 80s or 90s and I will be going through them in this blog series. For this article, I shot a roll with a Nikon AF240SV.

This point-and-shoot camera was released in 1999 and it sports a fixed 28mm f5.6 lens, automatic exposure function, integrated flash and a super DUPER bright viewfinder. It’s really bright, so bright it makes shooting pictures almost too much fun. I really had to restraint myself not to shoot everything at once. The camera was targeted at a more general and broad audience, like all point-and-shoots. Just shoot and save your holiday trips, kids and what not. Nothing too complicated.

This camera is a super simple one. Straight from Camera-Wiki and Nikon Product Archive:

The camera is small, stylish and sleek. It slides into jacket pocket easily, but it is too thick for jeans’ backpocket. My copy has previous owner’s Snoopy sticker on the backside. The maximum aperture is f/5.6, meaning it isn’t too bright a lens. The camera uses DX coding system for recognizing the speed of the film being used. If you’d like to shoot film with different ISO than the cartridge suggest, it is possible to circumvent DX-coding system with this method. The Camera-Wiki spec sheet says the camera uses 3V CR123A lithium battery, but my copy utilizes normal AA batteries. For once, a camera with easy to find batteries!

The roll of film I shot with this camera was Ilford XP2 Super 400. As I wrote before, the lens is 28mm f/5.6 so I wouldn’t really recommend using slower film unless shooting in bright daylight. For a summer day, ISO100 would be fine, but during polar night or evening shooting, I’d recommend using faster film. My film suppliers sell a variety of 100-400 films but when it comes to high speed films, the only option is Ilford Delta 3200, which is really an ISO 1000 film. But with DX coding, you can’t shoot it at ISO 1000 or 800 without tinkering with the film cartridge. The camera does have a flash. Below you can see a picture of my dog illuminated with the flash.

The flash does its best to fill a foreground of the image, but as it is with these kind of flashes, the end result is rarely acceptable. There is an option to disable the flash, so you can take longer exposures using tripod or similar. I was unable to find information about the shutter speeds this camera utilizes.

The camera is light-weight and easy to use, as you would expect from a point-and-shoot. The autofocus is so silent I found myself doubting that did it really actively focus. There is no in-focus indicator, you just point and click and hope that the focus hits the middle. Some compacts I have been using lately use a segment focusing, with icons like people, trees and mountains for 1 meter, 1-10 meter and 10- infinity focusing. This camera has none of those rugged systems. This camera just “maybe” focuses.

The most pleasing part of shooting with Nikon AF240SV was the viewfinder. When you peer through the VF, you are instantly wowed by the brightness of it. It makes composing images more fun and easy. It’s a surprisingly large factor effecting user experience.

First off, a word of warning. My film scanner is still broken or I don’t know is it the software that’s causing these stripes on my pictures. I sent the scanner to service and they changed the film scanning sensor, but it didn’t really help, the stripes are still there. If you have a tip for me for avoiding those stripes, please do tell! But anyway, here are some image samples. I did kinda like the image quality, although some of the samples did not turn out very good IQ wise. 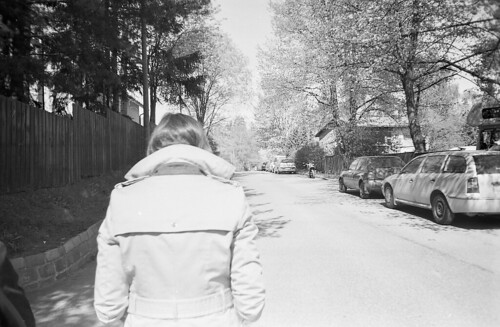 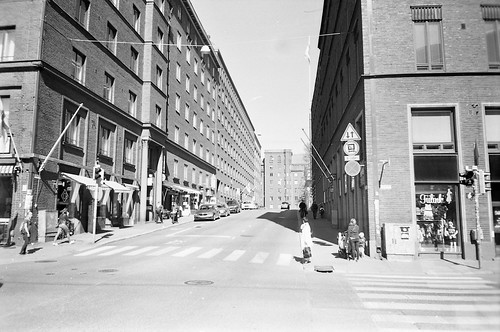 Well the Nikon AF240SV is a cheap plasticky point-and-shoot camera with auto-everything. The lens is nice enough to allow some creative expression, though it is nothing fancy. I didn’t notice any odd or special “character” in the lens, just quite normal and sharp enough action. No X-factor present here. I paid 8 euros for the camera and for that price, it’s okay. The camera feels like there isn’t really any easily breakable parts. I would suspect the device to last for decades if treated well.

I’m not going to shoot any more with this camera. The previous One Roll camera Samurai has already seen another roll, but this one will go into a cardboard box for the foreseeable future. Too many interesting compact cameras out there to waste anymore time in shooting with this one. Although I believe you could shoot very creatively with this camera too. It’s light-weight, pretty, slick and produces nice images.