The idea of One Roll, One Camera reviews is to take a film camera or an odd lens and shoot a roll of film with it and write a review about it. Most of my cameras are from the 80s or 90s and I will be going through them in this blog series. For this article, I shot a roll with the Pentax PC35AF.

My copy of Pentax PC35AF came with a separate winder. At first (and long) I just thought the camera looks bulky and odd. It wasn’t until I was preparing to write this review and I stumbled upon 35mmc’s review of this camera and I though my camera looks different than this. And so I noticed the winder, which made the camera a lot bigger and heavier. I also noticed the winder had separate batteries and of course, there were long-dead batteries inside and their insides had leaked. When trying to pry the batteries out of their compartment, the plastic crumbled to pieces. The corrosive battery goo had done its damage over the years to the plastic and the winder was totally ruined.

I felt -a bit – silly as one of my biggest gripes with this camera had been the fact that it was really annoying to wind the film manually. More than once I scraped my nails trying to wind the film. Now that I took off the malfunctioning winder, the whole rewinding wheel revealed itself and manual rewinding became a breeze. Eh. You live and learn. But let’s take a look at the camera’s specifications as Camera-Wiki them lists.

Shooting with Pentax PC35AF is not a pleasure. After I took the winder add-on off, the bulk of the camera lessened considerably after which it became more comfortable to use. But still, the viewfinder is tiny and there is no diopter adjustment possibility. The shutter makes a weird buzzing sound when it goes off, making me doubt if it’s malfunctioning. The shots of the One Roll did turn out okay so the shutter works, it just sounds weird. The lens is bright at f/2.8 and the focal length is very usable 35 mm. The lens is protected by a nice lens cover that snaps open with a turn of a lever.

The size of the camera makes it a nice candid camera for street photography, although the tiny VF makes it less suitable for such. Sometimes I had to squint my eyes to see through it. The flash is off by default as the retracting lens cover goes over the lens and you have to slide another lever (I love the levers!) to pop up the flash. The ISO range is of a peculiar kind, going from 25 to only 400. At F/16 the fastest shutter speed is 1/430th of a second, and at larger apertures it is less. Bright lens and slow shutter speed makes this camera best used with low ISO film. On a bright day with fast film, the aperture tightens so small, you won’t be getting much bokeh.

The focusing is done by zone focusing. When you peer on the viewfinder, you see icons for man, group of men and a mountain. Man is for close focusing (0.7 meters), group of men a bit farther and mountain is infinity. When you half-press the shutter button, the crude focusing system tries to guess how far the middle point is. On my roll of 36 exposures, about 10 were misfocused. The system doesn’t do a very good job at focusing and at times the focusing doesn’t work at all, you have to half-press the shutter button again to obtain focus.

The build quality is sturdy, the camera is made of high quality plastic and it seems to be able to take on the test of time easily. It uses cheap AAA batteries, so you won’t run into problems with acquiring new ones when old ones die. The camera has a back light button which helps when shooting a subject with bright background. When you press the back light button simultaneously with the shutter button, the image is overexposed by 1.5 EV so your subject in the foreground won’t be all dark.

The Sample Images from Pentax PC35AF

I am still a beginner photographer, with only a few years of this craziness behind me. When I was shooting this review, I went to the forest to photograph some nature, almost like in a street photography fashion, just shooting at what I saw and deemed interesting. After I developed the film, I realised that of those forest shots, most had been me shooting pretty, warm colored late afternoon sun rays.

One of my first learning experiences shooting B&W film is to shoot contrasty scenes or playful luminance. Shooting pretty colours is pretty futile when they don’t translate AT ALL. 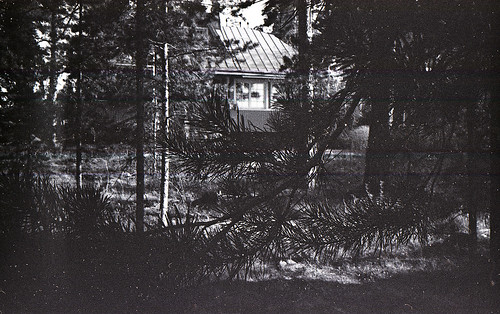 The Pentax PC35AF isn’t really a joy to use. The VF is small, the shutter makes a strange buzzing sound, the shutter button has poor feeling to it and the autofocusing system is unreliable. But the build quality breaths high quality plastic, the camera has a solid feel to it and the retro levers for opening lens cap and popping up the flash are nice. The lens itself is bright and produces nice and sharp images. It’s a good point-and-shoot with nice back light function and flash set to ‘off’ as default. Not many compacts offer low ISO options, but this one goes down to 25. That opens up nice possibilities, at least if you could trust the AF.